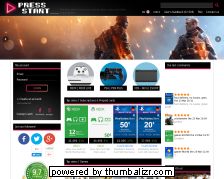 Press-Start (formerly Playstation Plus Now) is a site of the same group as Instant-Gaming allowing you to buy, for example, Xbox, PS4, 3DS and Wii U games.

Previously, Playstation Plus Now allowed you to buy only PlayStation Plus subscriptions at lower prices.

Now, since their name change, this site allows you to save money on your purchases of :

Trusted site of the same group as Instant-Gaming to buy Xbox, PS4, ... games, PlayStation Plus and Xbox Live subscriptions, as well as gift cards at low prices.