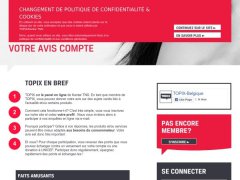 By registering on TOPIX, you will receive surveys twice a month (sometimes a little more often, sometimes a little less often) + 1 special survey for your birthday (which will allow you to earn 20 guaranteed points).

Since TOPIX is a site of Belgian polls, they will only propose you polls concerning :

In short, to register on TOPIX, you must reside in Belgium.
Otherwise, you will never be part of the target group.

For those who do not like to receive dozens of surveys a week, this is the site you need.

Indeed, even if the winnings do not go up quickly on TOPIX, the site has still paid us several times and the only payment is still "fast" reached.

TOPIX allows up to 2 people per household (physical address).

Note : it's impossible to complete their surveys from a smartphone.

On TOPIX, you can be paid by bank transfer only.

By calculating the ratio between the number of points displayed in the above rate and the equivalent in euros, it's therefore advisable to wait for 1500 points to request a payment.

You receive 5 € when your referral accumulates at least 250 points.
Warning : the sponsorship is by invitation only.