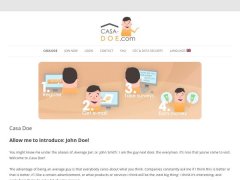 Casa Doe is a Carsten Sander panel that allows you to specify whether you like a particular advertisement, product or service.

By giving your opinion, you will obviously be rewarded with some money.
Of course, the remuneration is always adapted according to the length of the completed survey.
On Casa Doe, you can therefore give your opinion by responding to surveys that you will receive by e-mail, but also through telephone surveys (better paid than those by e-mail),, product tests, secret purchases and participation in moderated forums.

The majority of surveys that Casa Doe will send to you by email will pay between 0.50 and 3 BP.

Among the topics covered by these surveys, you will find : television, clothing, travel, supplies, ...

The "Casa Doe" panel is accessible to people aged at least 18 (or 14 if they have permission from their parents) and residing in Germany, Australia, Austria, the United Kingdom or Switzerland.

No payment proof available for this site